** Please note! Since this was originally posted in 2016, some of the products I recommended are no longer available. I will update at some point, but in the meantime, I have taken down a couple pages in this section detailing lunchboxes and cold lunch packaging. **

First of all, you need to know that no, my children do not have access to microwaves or heating elements at school. Anything that’s meant to be eaten hot, is sent to school already hot.

Now, the FDA makes it very clear that the safe zone to not promote bacterial growth is above 140 degrees F, or below 40 degrees. If your hot lunch’s temperature falls below 140F, it cannot stay there for longer than two hours (or one hour, if you’re above 90 degrees, but if that’s the case then what kind of monster are you, sending your poor defenseless smoochie-poo a hot lunch in the first place?). Since most of our children’s lunches are typically consumed 4-5 hours after having been packed, this can potentially be a big deal. So first things first:

You must pack hot foods in a hot food container. Period. No ifs, ands, or “why the hell did I open this blog post”s about it. If you’re not consuming your food within two hours of heating, you simply must take steps to ensure its temperature will be maintained. You need an insulated leak-proof steel container. Wrapping it in tin foil and throwing it in a tupperware won’t do it. Here’s what will:

Okay, so there is actually an 8-oz Round jar which is probably closer in size to the other two jars I’m reviewing below, but honestly, the width is the biggest thing this food jar has going for it. Even if you’re only sending a small volume of hot food, when we’re talking wraps or pizza pockets, cramming their soggy carcasses into muggy 8- or 10-oz jar is far less effective than laying them out in a more appealing fashion in a wider container. Just ask my youngest, who is intrinsically suspicious of all things “crust,” and will dig out the filling and abandon the lovingly crimped outer dough shell if it’s not perfect. As is the case for the other jars I’m reviewing,

LunchBots products are BPA/Latex/Phalate/PVC/Nitrosamine-free, and made of 18/8 stainless steel (which, unlike my ability to crack jokes, won’t get rusty). 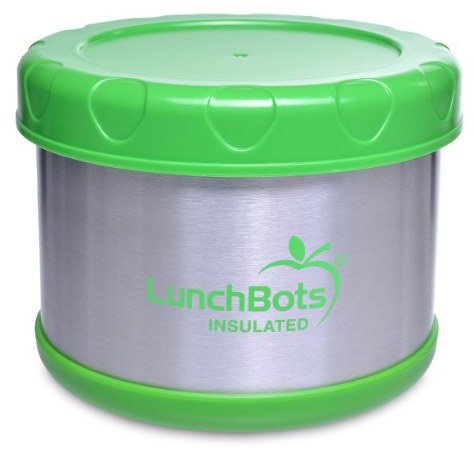 That being said, there are several strikes against this food jar. For starters, the LunchBots jar is much harder to open for smaller hands, precisely because of the awesome width of its lid. My nine-year-old  subject has a hard time on occasion, and needs his sister’s help. Also, it will occupy the majority of your lunchbox if you decide on a traditional cutesy-bought-it-at-Target one (see HERE for what I look for in a lunchbox). The insert states that a meal heated to 206 degrees (definitely read my HOW TO to learn basics of packing hot foods!) will be 125 degrees after four hours (below target zone, but acceptable if it’s only been below 140 degrees for a maximum of two hours). However, when I heated my jar’s contents to 175 degrees, it was only 100 degrees after about 3 1/2 hours. Way way way too cold, way way way too soon. “Nummy,” but potentially crawling with staph … bleah. Plus, it loses points for its “Handwashing Only” label.

Long story short, this container will not macerate your corn dog muffins (and I mean that in a totally non-dirty way), and is a very satisfying size for a hot meal, but just has trouble keeping the meals as hot as it should. It may work well for an adult or older child who just wants to keep food hot for a short period, but should be avoided for smaller lunchers, or long wait periods. 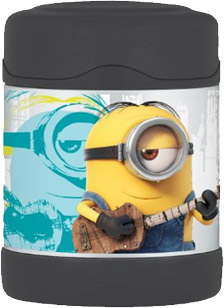 At first glance, looks almost identical to the Foogo. However, its construction is a little more robust, the lid is a little heavier, and overall, it weighs about two ounces more (and actually costs a few bucks less). It also comes in a very large variety of colors and designs (think old-school Ninja Turtles, to Elsa and Anna, to whatever-the-hell-a-Paw-Patrol-is). It also is advertised as maintaining heat for five hours and cold for seven, and it holds up to my thermometer in my mini tests (like the previous jar, temp of 130 degrees after 4 hours, when heating to 175 degrees). The decreased price when compared to Foogo containers seems to be due to sleeker construction – the lid is a little clunkier, the double wall is less sleek, and the water bottles (I discuss those here) can conceivably have smaller parts which could be choking hazards for the littler munchkins (which does NOT occur in Foogo water bottles, as you’ll see).

But, unlike the Foogo, our Funtainers (which we actually first purchased to replace the Foogo containers which came apart as described above) have withstood the test of time (and of my dishwasher). The clunkiness (which is really minimal – like I said, Sasquatch hands) hasn’t been an issue, and I am not prone to taking my thermos out at random times just to sigh deep sighs over how sleek its build is, so Foogo really has little to offer in this sense.

Pretty much the industry’s gold standard when it comes to canteens and food jars. After 4 hours, my content’s temp had not fallen below 140 degrees – possibly even too hot for a little one to eat without blowing on it first.

We own the 18-oz size (because Sasquatch hands come with Sasquatch appetites), but there are 10-oz and 14-oz sizes for smaller servings, and you can’t get much hardier than a Stanley. You also can’t get much lighter in frills – the design is stark and uninteresting. There’s a spork that snaps in on the larger models, but I don’t see it as an advantage because it is not always easy to use. The weight is also more than double that of any of the other brands I reviewed above, so less accessible overall to smaller lunchers. It is not as wide-mouthed as the LunchBot, so while removing and eating a hand pie or wrap may be easy to do, a piece of Banana French Toast Casserole (you sly dog, figuring out what my next batch of recipes has in store for you!) is more complicated. Then again, my kids are fine with cold french toast. But, at least when packing for a tween-and-up luncher, the price (capacity-ounce for capacity-ounce), is even lower than the standard Thermos brands, and nothing will keep your food warmer. Nothing.

Butit’shandwashonlybutIdon’tcareandIwashitinthediswasheranyway. And that’s all I have to say about that. Jen-nay.